16-time Funny Car Champion John Force is the winningest driver (155 wins) and holder of more all-time records than any driver in NHRA history. Force leads an organization that has won 21 NHRA World Championships.

Although John Force now owns one of the most successful teams in any form of motor racing, one responsible for 21 series championships and 280 NHRA tour victories, Force struggled early-on, both financially and professionally, racing in a belief shared by virtually no one else that one day he could become champion.

In fact, Force was winless in his first 10 seasons on the NHRA tour. Not only that, he came up second best the first nine times he took a Funny Car to a final round before finally breaking through on June 28, 1987 when he and a team led by crew chief Austin Coil beat Ed “the Ace” McCulloch to win the Grandnational at Montreal, Canada. Force was 38 years old.

Partnered with Coil, Force began to build what would become an American sports dynasty. Ultimately, Force would win two outright championships with Coil (1990-91) and 12 more with Coil and Bernie Fedderly, who came on board as co-crew chief in 1992.

With Mike Neff making the mechanical decisions in 2010, he won his first title in the NHRA’s Countdown Era and, three years later, he won again with Jimmy Prock assessing the performance data.

In 2005, he traveled to London, England, to accept the John Bolster Award for lifetime achievement, and in 2008 he was presented the MSEC Motorsports Achievement Award by the SAE (Society of Automotive Engineers) for his work in improving race car safety following the death of Eric Medlen, the first driver developed through JFR’s Next Generation initiative.

Now, Force is bidding to extend to 37 his record number of Top 10 finishes and to 35 the record number of different seasons in which he has hoisted at least one of the NHRA’s distinctive “Wally” trophies.

He enters the campaign after earning five final round appearances with three wins that included sharing the winners circle with daughter Brittany in Topeka at Heartland Motorsports Park for the first time in history. In addition, Force had three No. 1 qualifying positions. Once more, he’ll be trying to improve on the perfection of a career in which he has won more races, appeared in more finals, been the No. 1 qualifier more often and won more racing rounds than anyone else in history.

Click the 8 parts of the racecar below to learn more about this machine!

The wheelie bar is used to prevent excessive front-wheel lift. 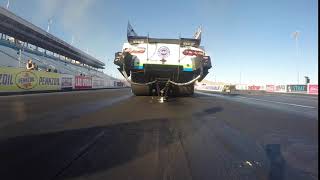 A roll cage is a specifically engineered and constructed frame built to protect the driver. 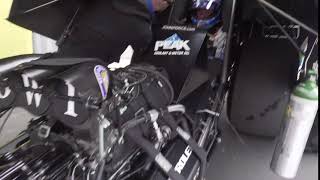 Our 2022 Chevrolet Camaro SS funny car body is made of carbon fiber with a titanium structure. 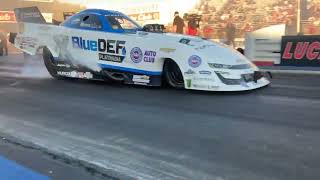 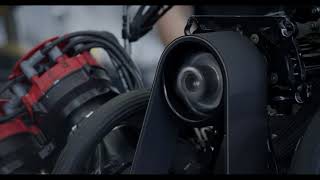 The rear spoiler is mounted onto the body and is made of carbon fiber and capable of applying 5,000 pounds of downforce to the rear tires. 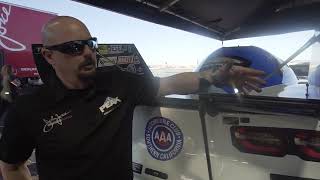 The hand shield is made of titanium and bolted on the car after the driver is seat belted in. It deflects flames and debris away from the driver in the event of a fire or explosion. 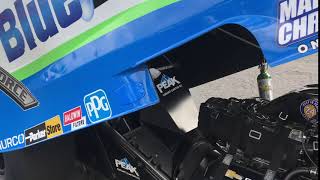 The scoop sits on top of the blower that feeds air and fuel into the supercharger. It’s what the throttle pedal is connected to. 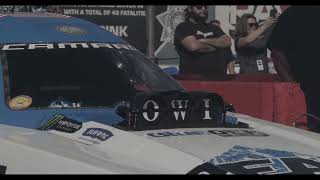 Here at John Force Racing we produce all of our graphics and paint schemes in house and have a full graphics department, format printer and multiple paint booths. 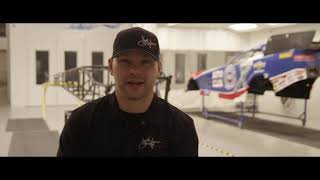 Daniel grew up racing with his dad....

Daniel grew up racing with his dad. He enjoys playing hockey and spending time with his wife and two little boys.

Tim proudly served as a SGT in...

Tim proudly served as a SGT in the US Marine Corps and started working on an Alcohol Dragster in 1997, Pro Mod in 2004 and nitro Funny Car in 2008 where he won a Championship with John Force in 2010. His hobbies are shooting, boating, camping and spending time with his family. He’s married to Alicia with 3 little girls (one is an angel watching over them, Skylar Grace) has two furry kids and is proud to work at JFR.

Brandon has been working for John Force...

Brandon has been working for John Force Racing since 2012. He is here to win and do his job.

Jay has been involved in racing since...

Jay has been involved in racing since he was 19 and has worked on various professional NHRA teams including Pedregon Racing, Terry McMillen Racing and Maroney Racing. In his spare time he enjoys hiking.

At age 15, Trace built and raced a 1988 Mustang that led to other cars upwards of 1,500 horsepower. He previously worked for Kalitta Motorsports and Cruz Pedregon Racing. Racing is life!

Mark started working for JFR on Courtney Force’s Funny Car her rookie season and has been here ever since. He enjoys building and riding Harley Davidson’s in his free time.

Chris grew up around this sport, helping...

Chris grew up around this sport, helping his father with his dragster and watching NHRA drag racing on TV and attending events. He enjoys watching live sports, spending time with family and all motorports.

Sterling has been involved in drag...

Sterling has been involved in drag racing on and off for most of his life. Growing up near Orange County International Raceway, racing was always a part of his life. In his spare time he enjoys reading.

He grew up racing with his family...

He grew up racing with his family and previously worked at Terry McMillen Racing. In his spare time he likes fishing, camping and outdoor activities.