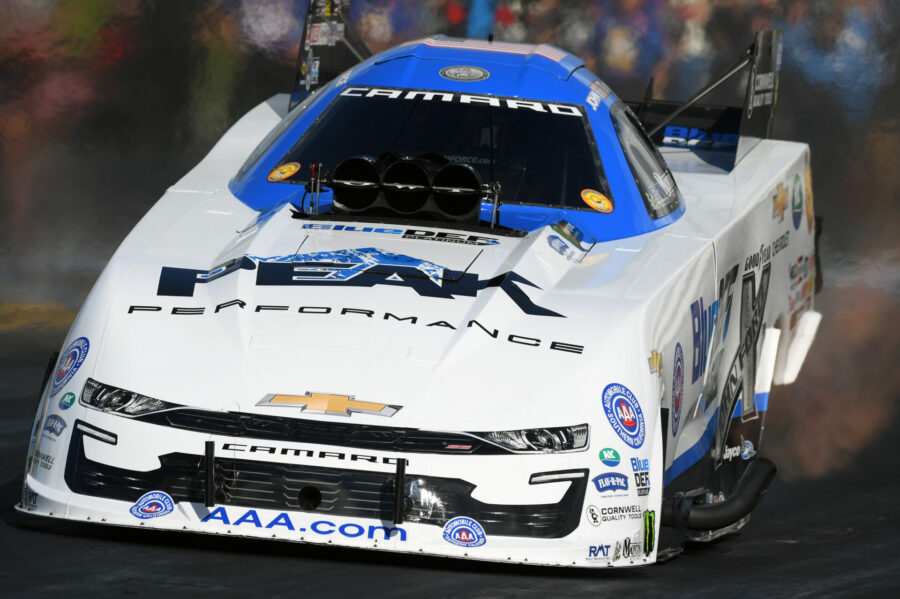 EPPING, N.H. (June 01, 2022) – John Force and the PEAK / BlueDEF PLATINUM Chevrolet Camaro SS team enter this weekend’s NHRA New England Nationals at New England Dragway as the defending event champions. Already with a win in the 2022 season, Force and company will be looking to repeat their success while solidifying their spot amongst the top five in the Camping World Series points standings.

In 2021, John Force handled his PEAK / BlueDEF Chevy to victory over teammate Robert Hight’s AAA Camaro. Much like this year, the win would come after collecting the Wally at the Charlotte Four-Wide. Force has also won the NHRA New England Nationals in 2015 and his lone No. 1 start in the Northeast’s premier event came in the inaugural race in 2013, where he finished runner-up to daughter Courtney Force.

“Love being in New Hampshire. It’s a great place to race. Epping has been good to me in the past. Winning there last year in front of those great fans, they really do come from all over to see us, it was a great feeling,” Force said. “I’m excited to be going back to New England Dragway, to be back in the seat of my PEAK Chevy. Two weeks off has been painful, time to go to work and get this BlueDEF Camaro in another winners circle.”

Coming off a victory just two weeks ago in Charlotte that extended to 34 the number of seasons in which he has won at least one NHRA tour event, Force is trying to win multiple events for the 27th season in hs career. Coming into the NHRA New England Nationals, the 16-time Funny Car champion sits fourth in the points standings behind multi-time champions Ron Capps, Robert Hight, and leader Matt Hagan.