In just five seasons Brittany Force went from rookie to Top Fuel World Champion by securing the 2017 Top Fuel world championship. She was only the second woman to hold the world title in Top Fuel and the first in 35 years. Now Brittany holds both ends of the Top Fuel national records.

Brittany Force’s drag racing career is highlighted by her 2017 NHRA season. Brittany made history by becoming the first woman in 35 years, and only the second ever, to win a Top Fuel World Championship.

Brittany was only sixth in points with one win in two final round appearances entering the 2017 Countdown to the Championship, NHRA’s six race playoffs, but was unstoppable thereafter. Brittany piloted her 11,000-horsepower dragster to four final rounds while winning three of the six races. She sealed the deal with a dominating performance in the season-ending Auto Club Finals at Pomona, Calif.

In that race, she qualified No. 1, set track and event records and became just the 12th pro driver to end a championship season with a wire-to-wire victory in the final event.

Coming off her championship season, Brittany was faced with adversity. She opened 2018 with a devasting crash at the Winternationals hosted at Auto Club Raceway at Pomona, the same track where she had won the world championship just two months prior. Brittany finished 2018 fifth in the points standings with a win in Houston and two No. 1 qualifying positions.

In 2019, teamed up with stand-out veteran crew chief David Grubnic, Brittany had two wins, including a bucket list victory at The Strip at Las Vegas Motor Speedway during the Countdown to the Championship and her second consecutive victory at the NHRA SpringNationals in Houston.

In 2021, Brittany put together an impressive streak of eight consecutive No. 1 qualifying positions for a career best total of 12 in a single season. She also had a historic win when she doubled-up win with her father, 16-time world champion John Force at Heartland Motorsports Park in Topeka, Kan. It was the first time in NHRA Camping World Drag Racing Series history a father and child duo shared the winner’s circle and the fifth time John Force Racing has had a Funny Car / Top Fuel double-up.

Brittany got her drag racing start at Frank Hawley’s Drag Racing School. After completing the licensing process, Brittany raced in Super Comp for three seasons and in the Top Alcohol Dragster division for three more.

When it came time to turn pro, Brittany opted for a ride in a Top Fuel dragster, the first in John Force Racing’s history. In her debut season, Brittany won the 2013 Auto Club’s Road to the Future Award as the NHRA Rookie of the Year. Brittany won her first NHRA national event in 2016 at the Gatornationals in Gainesville, Fla., she finished that season with three victories.

Click the 8 parts of the racecar below to learn more about this machine!

The Goodyear slicks on the rear are a maximum of 18 inches wide and nearly 10 feet in circumference. Air pressure is 6-8 pounds per square inch (psi). 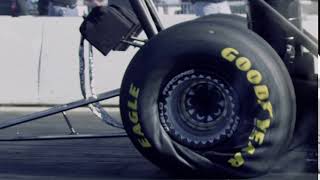 The intake manifold is what the supercharger sits atop and all the fuel and air go through the manifold into the cylinder heads. 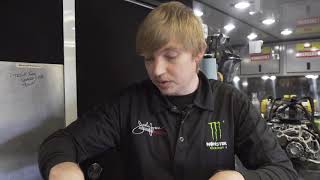 The canopy is made of carbon fiber and is virtually bulletproof. It’s purpose is to keep debris out of the cockpit and keep the driver safe inside. 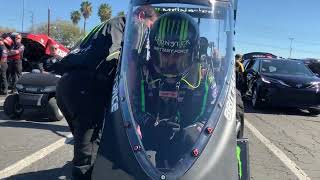 A hydraulic system that allows the throw out baring to move back and the centrifugal levers in the clutch to come in one at a time. 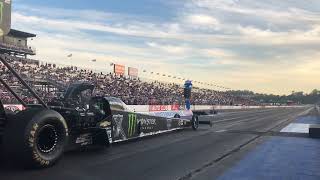 The 3 element wing made of carbon fiber works to create downforce. It’s shape dictates how the air moves over and under the wing. It is designed to apply downforce (in excess of 5,000 pounds) to the rear tires for better traction. 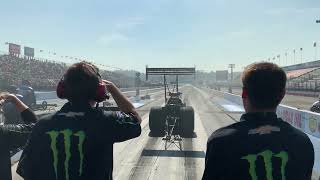 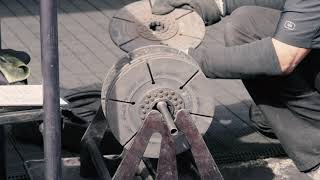 Our fuel pump is a gear pump that’s turned by the camshaft and displaces well over 100 gallons per minute of fuel during a run. 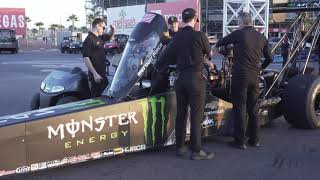 The front wing is designed to add front downforce to the dragster as the car gains speed. The fuel tank is located in the front of the dragster and gets lighter as you go down the track. The wing makes up for the weight lost in fuel. 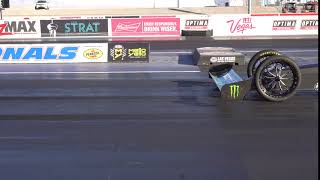 David started in drag racing at the...

David started in drag racing at the age of 13 and attended his first event at Surfers Paradise International Raceway near his hometown, where he saw a match race between a pair of Mustang bodied nitro Funny Cars running iron block 392 hemi’s. Watching those cars hooked him forever and he knew this was what he wanted to do. He is a fan of most motorsports, especially Formula 1 and Motocross/Supercross. In his off-time he enjoys riding his dirt bike in the mountains of Montana and at local MX tracks.

Mac started racing in 2001 with Chris Karamesines. He also had the opportunity to work with Cruz Pedregon, Scott Kalitta, Hillary Will and Doug Kalitta. He enjoys spending his free time at home with his wife and daughter, and flying airplanes every chance he gets.

Narciso has been pit...

Narciso has been pit crewing since 2011. His favorite part about racing is the relationship between man/woman and machine. The car is never bias; it doesn’t care if you’re old or young, tall or short, black or white, boy or girl. It’s just you, your car and the race track.

In his spare time Matt likes to...

In his spare time Matt likes to work on his project car, target shoot, read, and play video games.

Mark grew up watching racing and attended UNOH for High Performance, and has always wanted to build engines. His hobbies and interests include Jeeps, any type of racing, building trucks, and welding.

Justin grew up attending all kinds of...

Justin grew up attending all kinds of races but nitro racing has always been his favorite. He left home at 21 to attend the School of Automotive Machinists in Houston, Texas. While there, he worked at a world renowned high performance shop called Late Model Racecraft. After graduating from S.A.M., he continued to race ProMods and radial tire cars until the summer of 2015. He got his CDL and was hired on to Clay Millican’s Top Fuel dragster where he worked for over three years before moving to JFR.  In his free time you’ll find him building something, racing somewhere, playing guitar and fishing on the boat.

Andrew grew up going to the races...

Andrew grew up going to the races with his dad. He started on Scott Palmer’s dragster in 2009 and has also worked for DSR and Cruz Pedregon Racing.

Jimmy got his start in 2010 with Tony Pedregon Racing and has also worked for DSR. He loves watching NASCAR and dirt track racing and is an avid Kyle Larson fan. In his spare time, he enjoys long walks on the beach and reading romance novels.

As a kid, Cody went to the drag races with his father and got his start in 2012 with DSR. In his spare time he enjoys grilling.

Lanny grew up racing with his...

Lanny grew up racing with his dad who started L&T Clutches in 1980. Around 1982 he went drag racing full time as he needed to learn the race track in order to help their clutch customers. He’s still learning everyday.