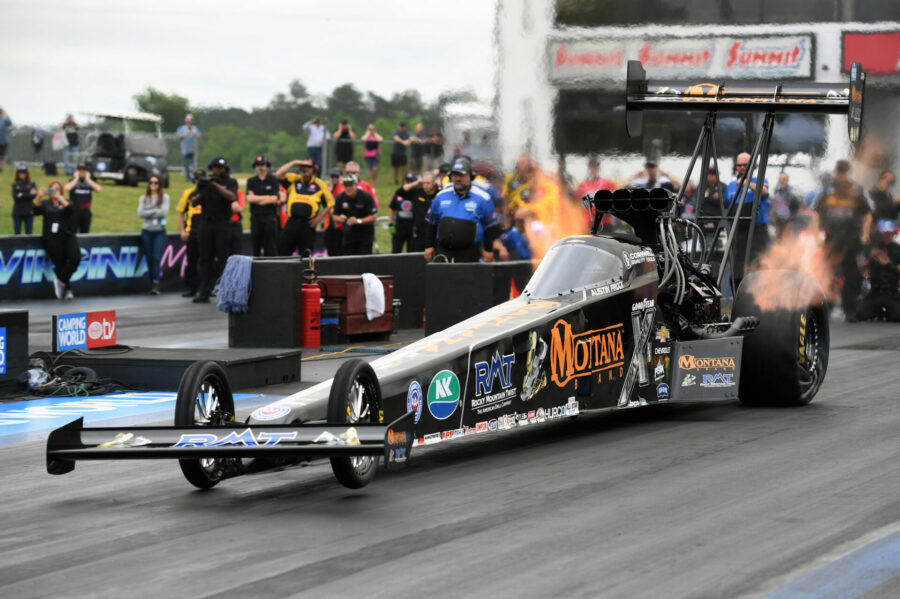 EPPING, N.H. (June 01, 2022) – Austin Prock and the Montana Brand / Rocky Mountain Twist dragster team head to New England Dragway for the NHRA New England Nationals filled with confidence coming off one of their strongest performances of the 2022 Camping World Series season at the NHRA Virginia Nationals that included a career best elapsed time.

Making just his second driver appearance in the NHRA New England Nationals, Austin Prock had a stout performance at the Virginia NHRA Nationals at Richmond in which he qualified No. 2 behind teammate Brittany Force and posted the quickest time of his Top Fuel career (3.672 seconds) before exiting in the semifinals. Prock had a first-round exit to multi-time reigning champion Steve Torrence in his rookie 2019 season but, in 2021, Prock would make it to the finals as a crew member of Robert Hight’s AAA Northern New England Chevy team, led by his father crew chief Jimmy Prock.

“I’m excited to get this weekend kicked off. The two-week break has seemed like an eternity,” Prock said. “New England Dragway has a lot of history so I’m amped up to be back in the seat of my Montana Brand / RMT dragster and working with my guys. We’re really starting to hit our strides. I think our package will have a good shot at winning the New England Nationals. Last year I went to the final as a crew guy, so maybe we can better that by one as a driver.”

The Montana Brand / RMT dragster, prepared by crew chiefs Joe Barlam and Rahn Tobler has been edging up the points standings. Prock is sitting fifth in points having jumped from seventh after his performance at Virginia Motorsports Park. Prock is bidding for his second career victory (he won at Seattle in 2019 alongside boss John Force) and his second trip to the final round this season, he had a runner-up finish at the season opening Winternationals.